At the BBC we were shown the workings of the radio studio, where we took part in a recording of The Archers, parts and sound effects performed by members. The recording was played back, much to the amusement of all.

It was then our turn to make a television recording acting as newsreaders when we learned that it is not so easy to read a teleprompt – especially to know what to do with your hands!

The piece de resistance was performed by Tricia as a weather girl – she was called on to ad lib though the forecast which she did very competently and amused the audience.

On to the SS Great Britain where a very knowledgeable guide took us through the history of and around the ship. She was  the first screw driven passenger liner in the world whose chequered history took her from New York to Sydney to her final resting place of the Falklands Islands.

After a long day we arrived back in Ferndown at 8.00 p.m.; a long day but enjoyed by all. 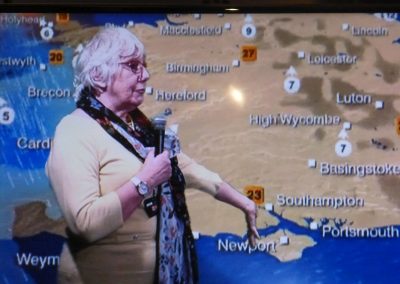 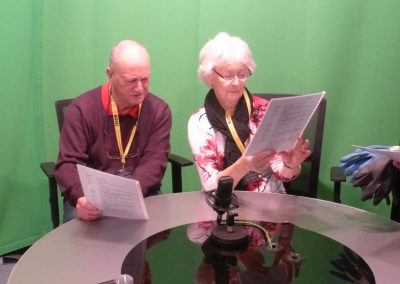 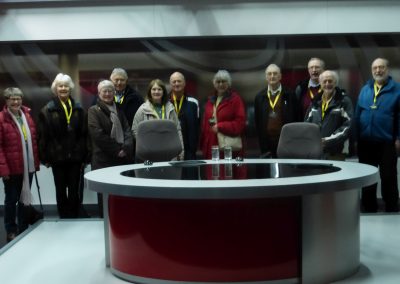 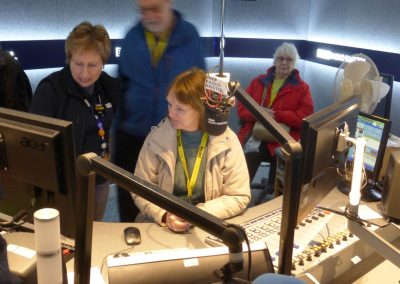 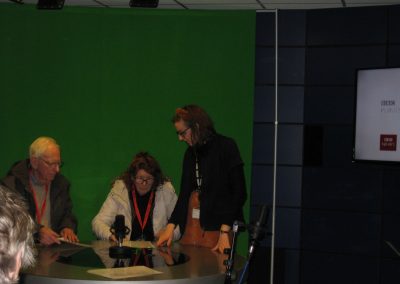 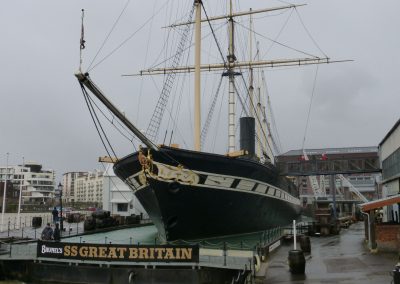 Our group toured the ship in the morning.  We were able to look into the cabins and see just how narrow the bunks were, evidently a bar and board were put up along the sides to stop people falling out of bed, due to the ships rolling – glad stabilisers are in use now!

There were usually four bunks in a room and perhaps a cot stowed under a bunk, poor baby! and no windows, even in first class it cannot have been too comfortable on a long voyage.

The bedrooms had washbasins in them and there were flushing toilets in use on board the ship, with beautiful blue painted toilet bowls on the insides.

We were informed there was plenty of hot water and fresh drinking water for the entire journey.

It was the first iron built, riveted, steam ship to be built, in the eighteen hundreds, but with the safety feature of sails in case of any malfunction of the engines.

There were babies born on board, and people died on board. The Dr. was paid a bonus for all the passengers who arrived alive and well in the port of call.

There were quarters for some horses which John said were probably going to be taken off in another country for use by the Military as they were branded with Government initials.

I had not given any thought to the fact but evidently there were many animals on board, cows for milk, chickens for eggs, and some were slaughtered for food. Looking after the animals must have taken a lot of time and energy from the crew, it must have been a smelly environment to  work in, on long voyages at sea.

The kitchen was very well equipped and the cakes, trifles and bread all looked appetising, this must have been  a very exhausting area to work in  due to the heat from the stove and such a small windowless room being used by quite a few crew members at  any one time.

Stoking the fires, putting up the sails, cleaning the ship every day at sea,  feeding animals and passengers, must have meant  the ship was very noisy and bustling with crew twenty four hours a day all the time it was sailing, not many places for  some peace and quiet, for the passengers.

The dining room was very luxurious for those that could afford to travel in style and we were told the way the lights were hung from the ceiling meant they always stayed straight if the ship was pitching at sea.  All the fittings were very beautifully made and a joy to look at, they would all still  look luxurious in today’s ships, with red covered chairs and long wooden tables.

There were children using the dining room to make their rat masks which was very enjoyable to  see them using their imaginations.

A visit to the interesting museum was very informative and well displayed, with plenty of information to absorb about the ship and owners.

People  could go to the dry dock  and view the  iron hull and propeller  under the water if you wanted to.  I was told this was very interesting.

A visit to Brunel’s dock office showed  just how talented and forward thinking he must have been.

You could evidently even   climb the rigging, if you so desired!

On the quay side and on board the ship there were wonderfully Victorian costumed  people depicting all walks of life, which added to the feel that you really were back in the Victorian era, the clothes, makeup and attitudes were so well re-produced.

After some refreshments, at least by us,  it was on to the  BBC studios for our group.

After  our ID had been scrutinised and bags searched we were escorted into a studio where various people were asked to play the parts of news readers and others to use the props for sounds.

We then watched the play back, it was certainly very entertaining, well, for those of us not brave enough to take part in the programme it was.

Then onwards to the news reporting room  where each person  stationed at various desks all had different roles to play in the broadcasting of programmes and each  aspect  of this was clearly explained to us.

In another room  the ceiling was festooned with every type of camera, that were used to interview people sitting at the desk in the middle of the room.

Would like to say a “thank you” to our coach driver who had a most difficult manoeuvre, to change direction in the middle of a very narrow congested road, completed successfully with some help from our coach passengers, Tom and Derek, when the   Council decided to put road closed signs,  in front of  his wheels,  without any consideration for the driver,  due to a  festival going to take place later in the day.

An unexpected tour of Bristol due to unexpected road closures gave a glimpse of some beautiful pictures on the side of buildings as well as the mindless graffiti sprayed on buildings making Bristol a place to delight on one road and a  disgraceful mess in others.

Thank you to Richard and all who helped to organise the day, and for choosing such interesting and informative venues, all  proved worth the early start, and thank you to the people on the coach all of whom were so friendly and enjoyable to spend the day with. 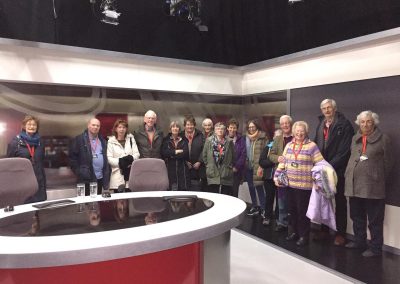 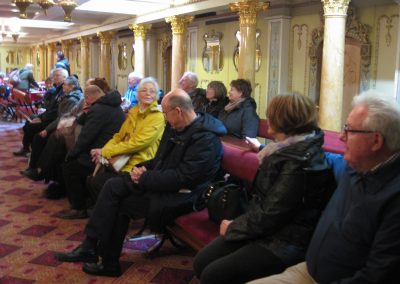 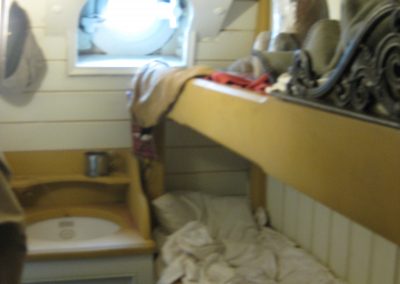 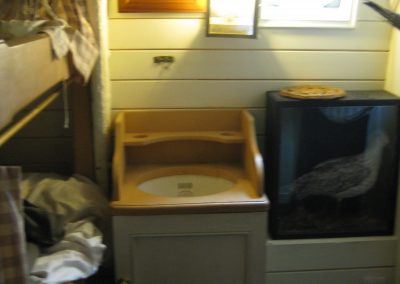 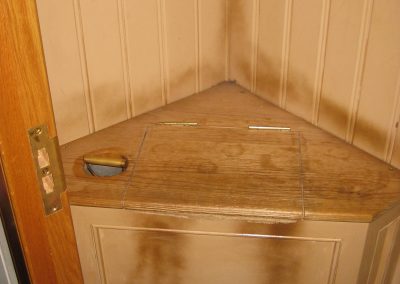 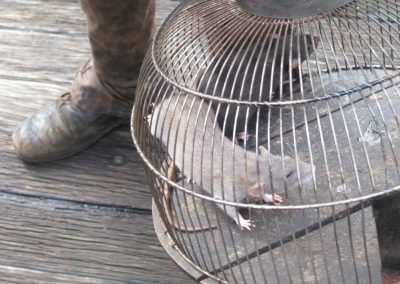 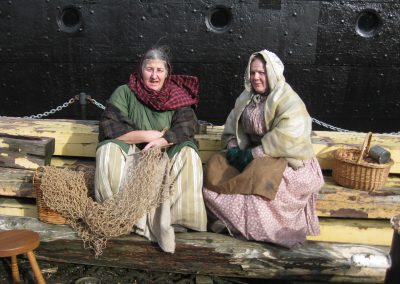 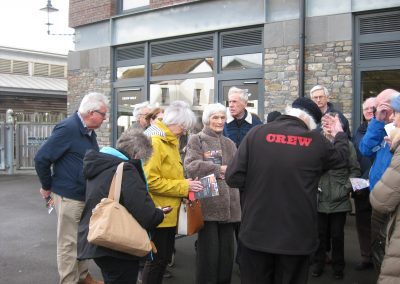 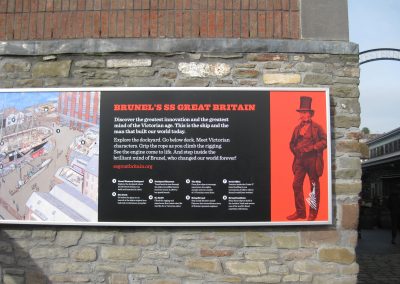