As mentioned previously, I like to extend the flowering season as much as possible, including getting flowers as early as possible. To this end, I have been overwintering my fuchsias, pelargoniums etc in my unheated greenhouse, as they can be flowering in March or April. If you do this, you should open the greenhouse doors and windows on fine days, as much as possible, to avoid getting grey mould (dilute vinegar is great to keep this at bay). However, it is very difficult to avoid getting the grey mould, and I suffered the same problem. I was getting a newer, much bigger greenhouse delivered, so I transferred the 100+ plants temporarily to my conservatory, noting the mould straight away (see photo 1). But don’t be disheartened, you can easily cut the infected parts off (see photo 2). Just make sure you a) cut into ‘green’ material, not brown, dead material b) cut just above a leaf node (to encourage more shoots) c) you prune the plant to a nice shape d) you scrupulously take away all the infected material, and spray the workbench with vinegar.

Whilst I wait for the major seed sowing to start in a couple of weeks in my heated garden room (including heated mats), I have been chitting my potatoes (some of them in photo 3), including 7 different varieties (including some for RHS Shows). These can be planted into potato bags in early March, and into the ground in late March (assuming no heavy frosts). Photo 4 shows the Anya potatoes, and for those who wish to enter the competition for the heaviest crop from one Anya potato, I will put these out for people to pick up in my drive, at the end of February.

Finally, just to show that I have as many failures as everyone else, photo 5 shows an amaryllis in full flower. I planted 2 of them in mid October, both the same size bulbs, in the same place (my conservatory), the same compost, same size pot, same amount of light, same level of watering. One did indeed flower for Xmas, and this one flowered 6 weeks later. You cant win them all!

PS – I still have lots of spring bulbs for sale for charity, in my front drive 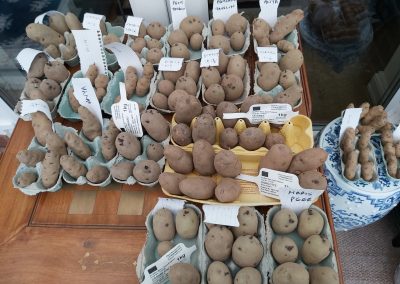 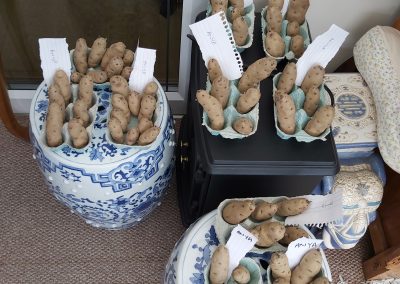 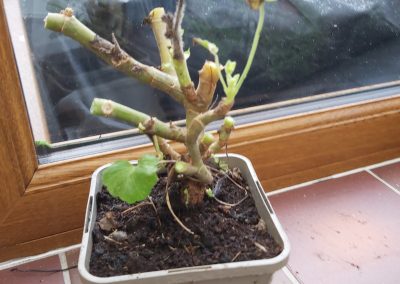 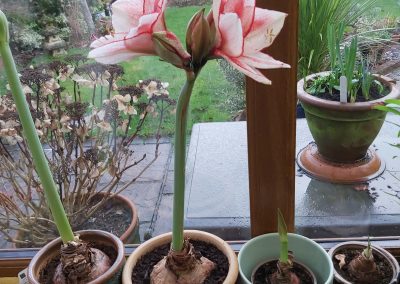